Stuff I do: marine invasive species 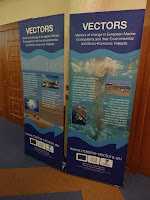 I'm in Slovenia now, attending the second annual progress meeting of VECTORS. VECTORS is a huge EU-funded research project on the ecological, social, and economic consequences of invasive alien species (and other related stuff) for Europe's seas. So while outside spring is finally taking off with a clear blue sky and a pleasant 18°C, we're indoors talking about jellyfish and oysters.

To get an idea of what VECTORS is about, consider the fact that international shipping brings us more than cheap laptops from China. As transport ships take in ballast water in the harbour of Shanghai, all kinds of critters may hitch a ride on those transport ships - Shanghaied, as it were. When this ballast water ends up in Rotterdam harbour, so do these species. From that point on, they are considered alien species as they are not native to the North Sea ecosystem. Because they are alien to the North Sea they may not survive for long. They may also find an environment with lots of food and no natural enemies. If this is so, and they become so abundant that they cause problems, we call them invasive alien species.

Take, for instance, the chinese mitten crab, which may very well have travelled from Shanghai to Rotterdam on board a cargo ship. The chinese mitten crab damages fish nets and occasionally clogs up water intakes of factories and power stations. Interestingly, however, it also has benefits because it is considered a delicacy in many Asian countries. Some European fishers sell their mitten crab by-catch to Asian restaurants! Another example is the comb jelly, which was introduced from its native American shores through ballast water. The comb jelly does not sting humans, but it eats fish eggs and larvae. One study estimates that the comb jelly may cost the Black Sea anchovy fishery about $17 million per year. 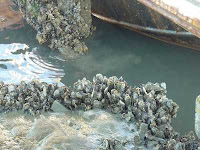 Shipping is not the only conduit for invasive species. The Pacific oyster was introduced deliberately by oyster farmers due to its size and growth. It is still considered a delicacy, but due to its sharp edges and its nasty habit of pointing its edges upwards it is considered a risk to swimmers and mudflat walkers.

So invasive alien species can have several different effects on the economy, notably fishing, tourism, and energy. In many cases those effects are negative, as fishers, mud-flat walkers and power stations can attest. Occasionally they are positive - if you happen to like sea food.

If it turns out that the negative effects of, say, the Pacific oyster outstrip its positive effects, the next question is what we should do about it. It is possible to reduce oyster abundance by fishing, as this video illustrates. You can also drag heavy chains over oyster colonies to destroy the shells. The big question is whether the costs of these interventions outweigh their benefits, where the benefits include the reduction in the costs of medical treatment and possibly an increase in tourism revenues as tourists probably prefer oyster-free coasts.

You could also try to make it more difficult for a species to enter European marine waters in the first place. Several technologies are available to treat ballast water in ships so that invertebrate stowaways do not become invasive aliens. Again, these methods can be costly.

So dealing with invasive alien species involves finding the right balance between three different sorts of costs. First, there are the costs of making it difficult for invasive species to enter your ecosystem. Second, there are the costs of reducing the species' abundance if it has invaded your ecosystem. Third, there are the consequences of the species' presence which could be good as well as bad. What makes this tradeoff particularly difficult is the fact that you often do not know which species may invade, nor how they will behave once they have invaded. So you need to take into account the possibility that your information changes in the future.

I'd love to say that this is what I do in VECTORS - but I should give credit to Adam, who is actually doing it. Adam is one of the PhD students I co-supervise, and he develops the models to analyse the tradeoffs I have just described. Besides Adam and me, there are 70 or so other researchers involved, including other economists, marine biologists, environmental scientists, ecologists, anthropologists and so on. In about three years, we hope to give EU policy makers some concrete advise how they can best manage invasive alien species in European marine areas.