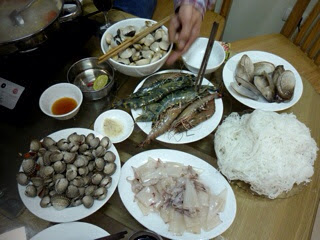 The day we arrived in Hanoi, Tu invited us at his home to get a taste of genuine Vietnamese biodiversity: swimming crab, carp, blood cockles, tiger shrimp, squid and some other species I don't remember. Like many Asians, the Vietnamese like their seafood fresh: everything except the carp and the squid was alive (and moved). It was served around a big bowl of broth, with tomato, ginger, pineapple, and lemongrass, where everything was cooked and the broth slowly became a delicious fish soup: say hello to the Vietnamese hotpot.

As far as I could see, all of the seafood served came from aquaculture - not a big surprise in a country that ranks third in global aquaculture production. Tu works at the Vietnamese Research Institute for Aquaculture as a fisheries economist, and he does his PhD research at our group on how the shrimp farmers in the Mekong delta adapt to climate change. Expectations are that as sea levels rise, and average temperatures increase, shrimp farmers will increasingly have to deal with disease outbreaks and salt water intrusion (black tiger shrimp are a bit like Goldilocks, preferring their water not fresh, not salty, but brackish). How will these farmers deal with these problems? In other words, what kind of autonomous adaptation will they implement, and what kind of planned adaptation can or should the government implement? 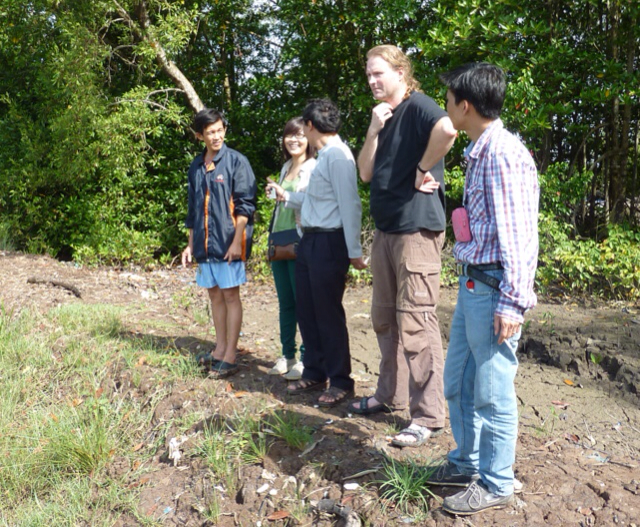 I had discussed these issues at length with Tu over the last twelve months or so, but it is difficult to discuss these issues if you have never seen these farms in reality. So Monique and I reserved a few days to travel to Soc Trang, Bac Lieu, and perhaps Ca Mau, where most of the Mekong Delta's shrimp come from. We were joined by Tu, Le Xuan Sinh (an aquaculture expert from Can Tho University) and Nguyen Trang (a master student at Wageningen University who does her thesis work in the Mekong Delta). Sinh suggested to drive along the coast road between Soc Trang town and Bac Lieu town the first day, and stay the night in Ca Mau town. The day after we went deep south: by car to Nam Can (the most southern town of Vietnam that can be reached by car), and then the boat all the way to Mui Ca Mau (the southern cape of mainland Vietnam). 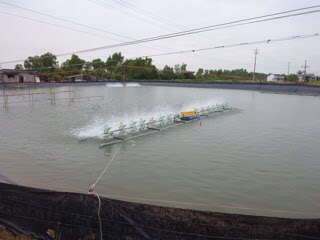 No matter how much I had read about Vietnamese shrimp farming before I came, it still struck me how different the shrimp farms in different regions are, and how strongly these differences depend on their natural environment. The relatively fresh waters of Soc Trang allow for intensive shrimp farming, in many cases even with systems where the pond is perfectly separated from the water or canal. These are fairly capital-intensive systems, with neatly dug ponds, aeration devices, and much use of shrimp feed and other inputs. These farmers have the system quite under control. 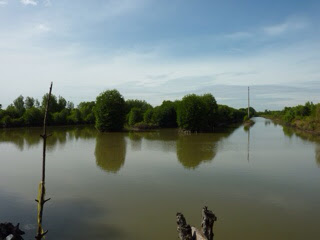 How different are the farms you find deeper south, in the vast mangrove forests of Ca Mau province. The water is much more brackish here, so that the ponds are more strongly connected to the rivers and canals. Farmers let water in or out to control the salinity of the water, and in some cases to take in shrimp seed and fish. In the center of the pond you find planted mangrove trees that provide food and shelter to the shrimp, and that are usually sold after about 15 years for firewood or charcoal. The farmers use little feed because the shrimp can feed on algae growing on the mangrove trees. 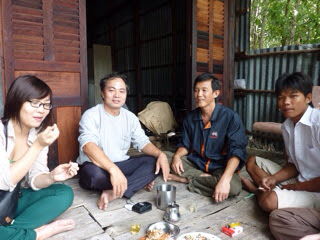 Apparently our visit was quite an event for this farmer. He invited us for a meal of cooked crab and some sort of Vietnamese jenever. Even though it was 11am we bravely jugged the stuff down because it would have been impolite to refuse. So here you have another problem of doing field work in Vietnam: you need to be able to drink. Heavily. All the more reason to let the respondents come to some central place instead of going from door to door yourself.
Although it is hardly featured in tourist guidebooks, I consider Ca Mau one of the highlights of my trip to Vietnam. Of course for being invited to food and drink with some shrimp farmer, and for the thrilling boat trip through the mangrove forests to Mui Ca Mau, but also for the mangrove forests themselves. I just love mangrove forests. The sheer fact of having a forest in such a salty, tidal area, with stilt-roots sticking in the mud. And when you look closely, at any square meter of the mud between the trees, you see the forest is teeming with life. Different species of crabs crawl over the bottom. A snake slithers by. Mud skippers skid over the puddles of brown water at the edge of the forest. 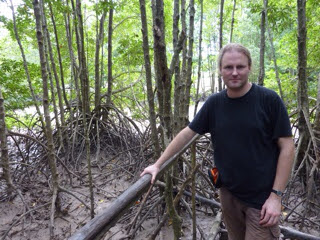 So what have I learned from this trip? First of all, there is no one-size-fits-all solution for Vietnamese shrimp farms to deal with medium-term or long-term changes in their natural environment. Adopting a closed system, or cultivating white leg shrimp (a hardy species from South America) instead of black tiger shrimp, may work for the intensive farmers in Soc Trang but not for the extensive farmers in Ca Mau. Second, there is a looming problem in almost all shrimp farms: the waste coming from the pond. Farmers regularly clean the ponds, and then a muddy mixture of shrimp faeces and salt comes out. It may have been a good fertilizer if it weren't for its salinity. So far no solution has been found for it yet, so all farms have a load of salty mud piling up. The farmers are not allowed to dump the mud in the river, but monitoring and enforcement is weak and the farmers have little alternative. Third, another problem is that the stock of wild shrimp is declining as more and more farmers catch wild shrimp seed in order to cultivate it in their ponds. Wild shrimp tend to be more disease resistant, but there is of course only so much that the local ecosystem can provide. Fourth, conducting a survey in areas like Ca Mau is going to be a daunting task: getting there over water, identifying and randomly selecting respondents, and last but not least staying sober.
Gepost door Rolf Groeneveld op 08:00